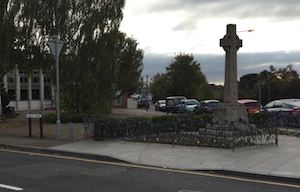 De-clutter the roads, pedestrian areas and simplify the layout. Also change the surface in front of Barclays Bank, to improve access for pedestrians and bank customers.

Artwork on or around the railway bridge will help encourage foot traffic to use shop front businesses on both sides of the railway, and look more attractive.

The Market Town Regeneration Fund initiative will seek to support and help revitalise Flitwick town centre, with a particular focus on rejuvenating the High Street and linking improvements to a proposed transport interchange at Flitwick Train Station.

Flitwick has an important role as a transport hub and broader gateway for Central Bedfordshire. However, it is faced with a number of ongoing challenges. Many of these are based on how the layout of Flitwick has developed over time. The town centre is, in effect, divided in two due to the presence of the railway line. The traditional High Street is on one side of the rail line, while the more modern expansion of the town is on the other, which is dominated by a large Tesco store and car park.

The centre does benefit from the presence of the mainline train station linking Central Bedfordshire to London St. Pancras and beyond. It acts as an important commuter hub and generates over 1.6 million passenger journeys per year.

Flitwick also provides the home station for the Center Parks Woburn Forest and as a consequence its profile is now significantly higher with considerable promotion of transport links to Center Parcs via Flitwick in locations such as Waterloo and King Cross.

Flitwick Station also links and provides an important facility to the Millbrook Testing Facility and Technology Park, which has developed major proposals for growth that are supported by the South-East Midlands Local Enterprise Partnership and other major employers including Lockheed Martin.

Due to the railway station, Flitwick does generate considerable footfall for a location of its size, so the ambition is, along with our plans to regenerate the area around the railway station and improve the retail offer, to capture more of this commuter spend and to improve the overall experience of visiting Flitwick, with public realm and accessibility improvements, to encourage residents to use the town centre.