Central Bedfordshire is a unitary authority serving a growing population of around 274,000. It is a largely rural area with over half the population living in the countryside and the rest in a number of market towns. The largest of these are Leighton Linslade, Dunstable, Biggleswade, Houghton Regis, Flitwick, Sandy and Ampthill.

The area is generally prosperous, with above average levels of employment. This could mask the few areas where we do have pockets of deprivation and, greater need (some households in Dunstable and Houghton Regis for example).

The area has excellent transport links with the A1 and M1 running through it, three main rail lines and two international airports, Luton and Stansted, on the doorstep. It is in the centre of an academic ‘golden triangle’ between Oxford, Cambridge and London Universities and also benefits from its own academic institutions at Cranfield University, the University of Bedfordshire and other further education colleges.

It is a great place to live and work. It is a relatively safe, green and affluent area which attracts major investment. People living in Central Bedfordshire earn more than the national average; this is in part influenced by some residents commuting out of the area – primarily to Hertfordshire, Luton, London Milton Keynes and Bedford.

Using the widest definition there are more than 11 million disabled people in the UK, that’s more than one in five of the adult population and one in 20 children. 80% of people experience a year of being disabled at some point in their lives and 66% of disabled people develop impairments during working age. The majority of disabled people have impairments that are not easily visible. In the 2011 census findings 15,465 (6.1%) residents in Central Bedfordshire indicated that day-to-day activities were limited a lot and 21,142 (8.3%) residents indicated that day-to-day activities were limited a little.

People who are proposing to undergo, are undergoing or have undergone a process (or part of a process) to reassign their sex by changing physiological or other attributes of sex are protected from discrimination.

The 2011 Census did not include a specific question in respect of gender reassignment. It is estimated from national research that 1 in 10,000 people experience the recognised medical condition known as gender dysphoria, generally referred to as being transgender or transsexual. In any school of 1,000 pupils there are likely to be six who will identify as transgender.

Protects women from discrimination because of their pregnancy and maternity. The health and wellbeing of women before, during and after pregnancy is an important factor in giving children a healthy start in life and laying the groundwork for good health and wellbeing in later life. Under 18 conceptions are lower in Central Bedfordshire than the national average and statistical neighbours. However, there are areas where under 18 conceptions are significantly higher than both the national and local authority rates. Children and young people who are already disadvantaged have an increased risk of teenage pregnancy therefore targeted interventions aim to reduce the risk factors by tackling the underlying causes.

Includes dimensions such as colour, nationality and ethnic or national origins. There are two essential characteristics which an ethnic group must have: a long shared history and a cultural tradition of its own. In addition, an ethnic group may have one or more of the following characteristics: a common language; a common literature; a common religion or common geographical origin; or being a minority or an oppressed group. 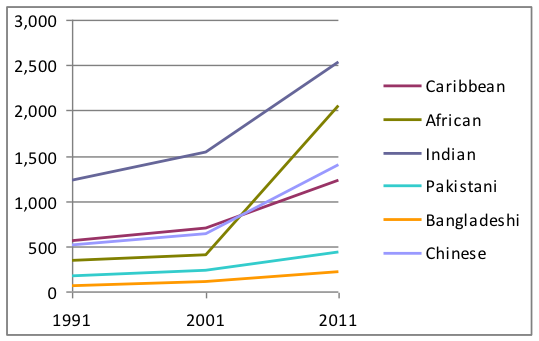 People of mixed ethnicity make up around 1.9% of residents. The increasing amount of data on migrant workers, unaccompanied asylum seekers and other young people from non-UK backgrounds predicts that immigration in the region will increase.

Means any religion and includes a lack of religion. The term ‘religion’ includes the more commonly recognised religions in the UK such as the Baha’i faith, Buddhism, Christianity, Hinduism, Islam, Jainism, Judaism, Rastafarianism, Sikhism and Zoroastrianism. A religion need not be mainstream or well known to gain protection as a religion. However, it must have a clear structure and belief system. Denominations or sects within religions, such as Methodists within Christianity or Sunnis within Islam, may be considered a religion for the purposes of the Act. 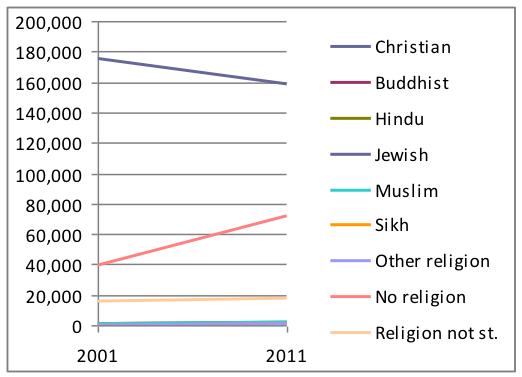 Refers to a male or a female of any age. The sex ratios of the Central Bedfordshire population vary according to age. In 2015, the younger age groups (ages 0-17) comprised 51% boys and 49% girls. There was an equal split among working age adults (ages 18 -64), while among older people (aged 65 and over) 53% of the population were women, and 47% men.

Relates to how people feel as well as their actions in terms of their sexual orientation towards:

The 2011 Census did not include a specific question in respect of sexual orientation. It is estimated that ‘out’ gay people living in the United Kingdom form between 6% -10% of the population. This means that in Central Bedfordshire approximately 20, 000 people are likely to openly be lesbian, gay or bisexual, with others feeling unable to disclose such information because they fear the reactions of people around them. The 2011 Census showed that there were 300 civil partnership couples in Central Bedfordshire. More recent data showed an average of 13 new civil partnerships each year between 2010 and 2014.

There are four key areas in which equality gaps are most likely to produce further waves of inequality for particular groups of people. They are early years and education, employment, health and criminal justice. The Equalities Review 2007 identified three types of extreme, chronic and persistent inequalities:

No part of Central Bedfordshire is in the 10% most deprived areas nationally, but five small areas, in Parkside, Downside, Tithe Farm and Sandy, are in the 10-20% most deprived in England. While Central Bedfordshire has relatively low levels of deprivation overall, these areas face particular challenges relative to the rest of the area. In addition, there are a number of communities (including the areas noted above) with specific issues, that appear in the 10% most deprived nationally when specific aspects of deprivation are considered such as crime, education, skills and training, income, and barriers to housing and services.