Garden waste update: all kerbside collections of household garden waste across all of Central Bedfordshire are suspended until further notice. Read the full waste collection update

We held our first Community Action Day in Leighton Buzzard

We held our first Community Action Day in Leighton Buzzard earlier this week. 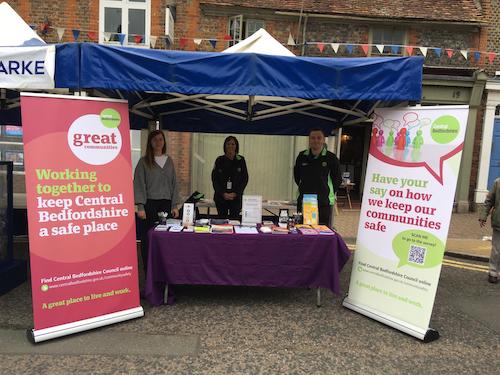 Safer Neighbourhood officers patrolled across Leighton Buzzard talking to residents, providing information about their services and how to report issues. They also issued over 40 home safety packs, which include ultra violet property marker pens, card safe wallets, property marking warning stickers as well as key ring size torches. They also attended the Pizza with Police event with the Groundwork East Youth Group at Vandyke School, with 25 young people in attendance along with their families, to offer information and advice about community safety issues.

We held a number of stalls on the market, with teams chatting to residents, sharing advice and information about a range of community safety issues, asking them to fill in the Safer Central Survey and offering freebies, including dog poo bags, pens, torches and information leaflets.

Leighton Buzzard Town Council also supported the event with its own stall, engaging with residents.

Our Parking Enforcement team offered advice and guidance to residents, answering questions as well as carrying out their daily duties in the area, with ten penalty charge notices being issued on the day. 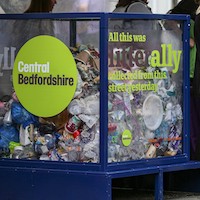 In the Market Square, the new ‘Trash Cube’ was unveiled by our Environmental Services team. The cube contained litter that had been picked up from the pavement around the Market Square. It showed the levels of litter that we and our contractors manage daily and aims to encourage residents to litter less.

We also undertook our normal cleaning duties in the area.

Members of Street Watch patrolled, with officers from our Community Safety and Housing teams; promoting the great work they do and explaining to residents how they can join them to make a direct impact on making their local community a safer place to live.

Our Highways team was also in the area, fixing minor potholes and loose paving slabs on the High Street and securing a tree bed.

Operation Abuela was also held, which focuses on the illegal transportation of waste and fly-tipping. Officers from Bedfordshire Police's Rural Crime team, along with environmental protection officers from our Safer Neighbourhood team, patrolled rural areas of Leighton Buzzard. The operation led to 18 vehicles being stopped and a fixed penalty notice being issued for the transportation of waste without the correct licence.

Bedfordshire Police and Crime Commissioner Festus Akinbousoye, who was involved with the operation, said:

Our Community Action Day was a huge success. With a range of our officers and teams out in the community it meant we were able to speak to lots of members of the public about a variety of topics important to them, and our teams were able to focus on a number of issues. We are hoping our Leighton Buzzard residents will be able to see a marked improvement in the area.

We received positive feedback from residents on the market stall, who praised the teams for their work in keeping the community safe and for updating residents about their work via social media, one resident even brought over a packet of sweets and said, “this is for all the good work you do”.

Following the success of this event, we will be holding another two Community Action Days this year, on 10 August in Biggleswade and in Ampthill on 16 September.