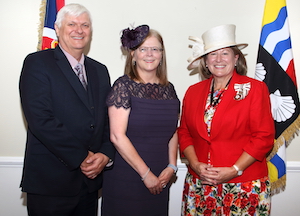 At a special ceremony held in The Canaletto Suite at The Woburn Hotel, by kind permission of Her Grace The Duchess of Bedford, HM Lord-Lieutenant of Bedfordshire, Helen Nellis, brought together the Bedfordshire recipients who received their Honour in the 2019 Queen’s Birthday Honours List to celebrate their success, and to learn about the work behind their achievements. At the same ceremony, the Lord-Lieutenant also presented a British Empire Medal to one Bedfordshire recipient on behalf of HM The Queen.

The recipients honoured in the Queen’s Birthday List 2019 were:

HM Lord-Lieutenant of Bedfordshire, Helen Nellis said after the ceremony:

It was a real pleasure to recognise those Bedfordians who received national Honours from HM The Queen this year in the beautiful setting of The Woburn Hotel. The various contributions that each of the Honours' recipients have made to our county and to our nation is outstanding. In going the extra mile, they have all made a lasting impact for good on our community.