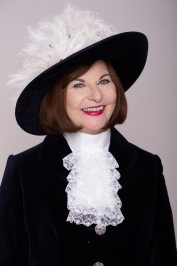 I have just come to the end of my Shrieval Year which has flown by incredibly fast but has been immensely enjoyable.

To have been nominated as High Sheriff for 2019-2020 was a tremendous honour and I hope that I have been able to give something back to the county in which I have lived and worked nearly all my life.

As a child, I lived and studied in Dunstable until I went to the University of Lancaster.  I graduated with a BA (Hons) before moving on to study at King’s College, London for a Post Graduate Certificate in Education.  I then began my long career in teaching, working first of all in a range of secondary schools and later having completed an M Ed. at Nottingham University, I went on to teach in Adult, Further and Higher Education.

I moved to Luton to work at Luton Community Relations Council as the Officer responsible for education, employment and training.  This deepened my knowledge of and commitment to the “super diverse” linguistic and cultural communities in Luton.  During this period, I worked closely with an educational organisation called Special Adult Learning Programmes, which I later joined and became Head of the Northern service based in Bedford offering classes for the “disadvantaged” particularly English for Speakers of Other Languages and Basic Skills.  I then accepted a similar role as County Co-ordinator for adult basic education for the county of Essex for three years before returning to Special Adult Learning Programmes as County Co-ordinator for Bedfordshire running classes in community venues throughout the county. I specialised in networking and partnerships and was privileged to welcome the Queen to my base at the Westbourne Centre in Bedford to open the new nursery funded through a joint bid with the Queen’s Park Partnership.  As the funding from the County Council was reduced, I was responsible for transferring all staff and provision to Barnfield College of Further Education.  I became Director of the Rotheram Avenue Campus and then the Technology Campus of Barnfield College in Luton while continuing to run the Basic Skills Service across Bedfordshire.

In 2003 my husband, Michael, became Mayor of Luton and as Mayoress I spent a hectic but wonderfully rewarding year attending functions and events showcasing the fantastic work of hundreds of voluntary and statutory organisations in Luton and beyond.

Since my retirement in 2012 I have continued to involve myself in the community as a governor of two schools, a Trustee of Bedford and Luton Community Foundation as well as a member of The Inner Wheel of Luton North.  I was also elected as a Councillor for Stopsley Ward at the last local elections and served on Luton Borough Council until I stood down in January 2019.

I feel particularly privileged to be the first woman from Luton to serve the county as High Sheriff and proud to be only the ninth woman High Sheriff of Bedfordshire in over 1000 years.  Indeed the office of High Sheriff dates back to Saxon Times and is the oldest civic post connected to the Crown.  The “Shire Reeves” were Royal officials appointed to collect taxes and enforce  law and order.  Their extensive powers are now almost all vested in other bodies such as the Judiciary, the police and the courts, as well as the Revenue and Customs and Local Authorities for the collection of taxes.  Today, the High Sheriff is the Queen’s representative responsible for Law and Order and the Judiciary in the county.  The role is mainly ceremonial whilst continuing to support the community and uphold values and traditions, in particular the Rule of Law.

As the first lady High Sheriff from Luton I have tried very hard to be equitable and cover all parts of Bedfordshire from Keysoe and Wymington in the north down to Luton and Eaton Bray in the south.  I have attended some four hundred events of which twenty- seven were out of county including the Queen’s Garden Party and fellow High Sheriffs’ Justice Services.  Within that I have made over eighty speeches – some impromptu, some planned.  I have attended eighty- six events relating to Judges, courts and the Police and another sixty - eight relating to the Military, Cadets and Fire Service who on one visit cut me out of a “crashed” car.

As my theme for the year was community cohesion, I was particularly pleased to have attended eighty two religious services and events in a wide variety of faiths including Christian, Jewish, Sikh, Muslim, Hindu and Bahai.  I also enjoyed participating in a number of large multi-cultural events including the Luton Carnival and Mela, The Queen’s Park Orchard Parade and a number of Sikh Commemorative events.

I have also spent a great deal time visiting over one hundred and fifty voluntary organisations. As High Sheriff travelling around Bedfordshire I have seen great poverty, hardship and homelessness.  I have visited refuges and met abused women, and those dependent on drugs and alcohol.  I have seen the sick and vulnerable whose lifeline is the foodbank.  However, I have also seen so much that is positive and good – thousands of people working selflessly in voluntary organisations in order to improve the lives of others is incredibly uplifting.  It has been a joy to support these organisations and bring many of them together to increase their impact.  However, I am painfully conscious of their own struggle to maintain their funding in order to continue their brilliant work and the expertise that they have built up.

I have not only enjoyed my three main events – my Installation on the 30 March 2019, at the Town Hall in Luton, my Garden Party at Wrest Park  on 7 July 2019 and my Justice Service at St Paul’s in Bedford on the 22 September 2019 but also my other events.  Firstly, there was my fashion show at All Seasons Boutique in Sandy on 25 April 2019 which was arranged by the late Lady Errol (Former High Sheriff) who insisted that I was one of the models!

Then there was the Golf Day at Luton Hoo in rather windier weather on 22 September 2019.  I cherish the vision of Julian Polhill (Former High Sheriff) erecting a wonderful gazebo for the mid- course refreshments and he together with three other former High Sheriffs holding on to each corner like flying buttresses trying to prevent the whole thing from blowing away.

I enjoyed the atmosphere and the Indian meal at a local Indian Restaurant on 25 November 2019 and my Choirfest at the Priory Church, Dunstable on 28 February 2020.  This showcased four local choirs and was compered by Pam Rhodes.  All these events have raised in excess of £18,000 for my charities – Keech Hospice, Crimebeat Bedfordshire and The High Sheriff’s Fund administered by Bedfordshire and Luton Community Foundation.

I was particularly looking forward to my Birthday Party and Awards Ceremony at the end of March 2020.  This was designed not only to thank the Voluntary Organisations I had visited during the year but also to recognise some amazing people from across the county who have shown truly remarkable citizenship.  Regrettably this had to be cancelled because of the Coronavirus pandemic.

Other notable highlights in my year have included welcoming Prince Harry to Lealands High School in Luton, the Duke of Gloucester to St Mary’s Church, Eaton Bray and also Wardown Museum in Luton and Princess Anne to Terminal 2 of Luton Airport.  Some other memorable events have been acting as Returning Officer in the December General Elections and officiating at Citizenship Ceremonies.  I also enjoyed attending a number of court hearings in the Magistrates, Coroners, Family and Crown Courts as well as presenting four High Sheriff Awards in the Crown Court.

My thanks go to our Lord Lieutenant, Helen Nellis, as well as all the Bedfordshire Shrievalty, my Under Sheriff, Martin Oldham and my husband Michael for all their support.

Altogether it has been an extremely busy but wonderful year with so many memories of amazing people doing amazing things throughout the county. 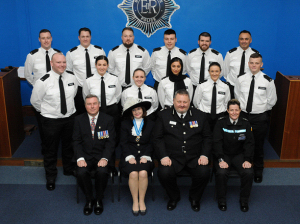