View more information and take part in the consultation.

The purpose of this consultation was to help shape "big picture" options for growth which will then inform the development of of the draft Local Plan, to be published on 4 July 2017 for consultation.

What did we ask?

We set out four broad areas (A, B, C and D) and the potential for growth in each of these areas and any constraints too.

This information is set out below. 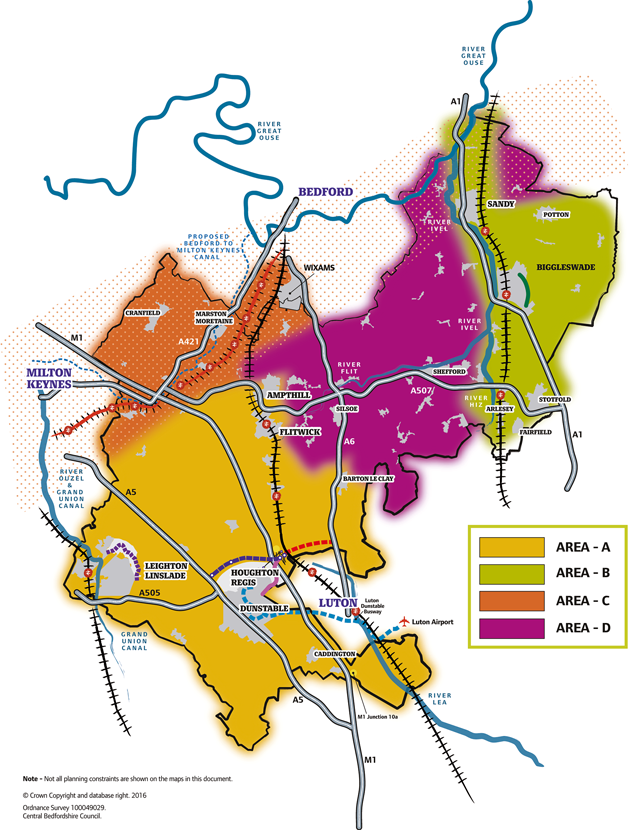 Overall: Potential for all levels of growth including strategic scale growth adjoining urban areas, where Green Belt release can be justified.

This area is constrained by the Green Belt and Chilterns Area of Outstanding Natural Beauty. However, major sites to the north of Houghton Regis are already under development or have planning permission while significant growth is underway at Leighton Buzzard.

Growth potential: Small villages in the Green Belt generally have limited capacity to grow but there is some potential for medium scale growth along the major transport corridor following the M1, A5 and the railway (Midland Main Line), or large scale growth for sites immediately adjacent to Luton that could be linked to the Luton- Dunstable Busway. The lack of new sites within the urban areas of Luton and Dunstable mean that significant further growth in Central Bedfordshire is likely to be required. However any further development in the Green Belt will need to be thoroughly justified to meet national planning policy.

Environment: The Chilterns AONB and Greensand Ridge Nature Improvement Area (NIA), with their valued habitats and landscapes are existing environmental assets. Opportunities for new environmental projects include creating a long distance cycleway along the Greensand Ridge, and new Country Parks for Ampthill and Flitwick, and the Barton-le-Clay area.

Overall: Potential for all levels of growth, including new settlements, if appropriate supporting infrastructure is provided.

The broad corridor running south-north from Arlesey to the north of Sandy is well served in transport terms with the A1 and East Coast railway, both of which have potential for significant upgrades.

Growth potential: New development will need to provide for jobs growth in order to try and reduce out commuting and to generate investment to benefit town centres and improve local services. At Sandy in particular, there is potential to benefit from the East West Rail proposals and to attract business and housing growth along the Oxford to Cambridge corridor. This area has the potential to accommodate major growth providing it can be planned sustainably and generates clear benefits for existing communities.

Environment: The Greensand Ridge and Ivel Valley and their valued habitats are existing environmental assets. There are also opportunities for new environmental projects, including a new Country Park for Arlesey and Stotfold, a long distance ‘Great North Cycleway’, and access and open space networks around Biggleswade, Sandy, and the Arlesey, Stotfold and Fairfield areas.

Overall: Limited potential small scale growth for existing settlements. Potential for medium up to strategic scale growth including new settlements subject to investment in infrastructure and viability of sites at this scale.

The north of Central Bedfordshire is an important economic area with advanced research and development at Cranfield Technology Park and Millbrook Proving Ground and close links with Milton Keynes. The area is well connected with the improved A421, and the M1, and the planned section upgrade for East West Rail between Oxford and Bedford

Growth potential: With the right infrastructure investment, this area may be able to accommodate significant growth, potentially in the form of new settlements but the timing and commitment of further transport investment will be crucial. Many of the smaller settlements have already grown significantly over the past few years.

The central part of Central Bedfordshire is characterised by market towns and villages linked by rural roads and the potential to upgrade infrastructure such as roads is likely to be limited.

Growth potential: Any growth is likely to be of a small to medium scale and will be focused around settlements which have good services and suitable sites.

Below is summary of the key feedback themes.

Respondents were keen to:

There were mixed opinions about where growth should go, with slightly stronger support for growth in area C (east/west corridor).

There were mixed opinions on new settlements/ expansion of existing settlements.

They were clear on building around existing roads and infrastructure and using brownfield sites though.