Vaccinations: COVID-19 case numbers are still very high. Get vaccinated and get your booster dose. Find out more about vaccinations 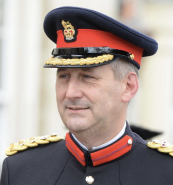 Chris has spent over forty years in Law Enforcement, having served in the UK Police Service at senior level both domestically and abroad. He is currently Managing Director of CSS Global Consulting Ltd which specialises in training and resilience issues, working closely with International partners such as the United Nations Department of Peacekeeping Operations, European Union, UK Stabilisation Unit, and US State Department. His work has meant regular overseas travel, mostly in Africa, and he has been involved in projects in Sudan, Ghana, Bangladesh, Togo, Burkina Faso, Botswana, India, Rwanda, Lebanon and the USA.

Chris has been a long-term volunteer in the Army Cadet Force (ACF). He was commissioned in London in 1987 and worked at local, Regional and National levels, attaining one of the three top volunteer roles with the Army’s Cadet Forces prior to retiring his commission in August 2020.

For over 14 years, he has served the East Anglian Reserve Forces & Cadet Association as a military member and is Vice Chair of the Bedfordshire County Committee.

Chris has had an association with St John Ambulance since 1976, having been a Police First Aid instructor, he was appointed Commissioner Operations in Hertfordshire in 2007 but had to relinquish the appointment due to an overseas posting. Since then he has maintained a support role in various areas, most recently chairing the Honours and Awards committee for the Bedfordshire County Priory Group. During the COVID 19 crisis he returned to operational roles assisting with Communications at a Regional level.

He was the main driver in the formation of Bedfordshire Youth United in 2014, he is a Vice Patron of Families United Network (FUN), and Autism Bedfordshire, a life Governor of The Royal Humane Society and a member of the Bedfordshire Committee of the ABF (The Soldiers’ Charity).

He was appointed to the Most Venerable Order of St John of Jerusalem for services to mankind through First Aid in 1993, Deputy Lieutenant for the County of Bedfordshire in 2014 and Member of Order of the British Empire in the New Year’s Hours list for 2017. Chris holds a master’s degree in Emergency Planning & Disaster Management from the University of Hertfordshire, a Certificate in Education, and a Graduateship in Management & Training from the City & Guilds Institute. He is a Chartered Fellow of the Chartered Management Institute, a Fellow of the Institute of Civil Protection and Emergency Management and a member of the Emergency Planning Society.

Married to Karen with one daughter, his passion is voluntary service, any spare time left is spent working on restoring his 17th Century farmhouse back to its former glory.